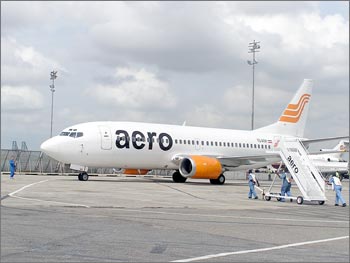 Nigeria’s oldest domestic carrier Aero Contractors has just suspended scheduled flight services with effect from today September 1, 2016 but the Nigerian Civil Aviation Authority (NCAA) has dismissed claims that some airlines in Nigeria were shutting operations insisting that the airlines in question merely suspended scheduled flights temporarily as a safety measure.

While explaining that Aero Contractors still operates charter services, the Director General of NCAA; Capt. Muhtar Usman Says the airlines were merely embarking on a temporarily suspension of flights to overhaul and strengthen their operations.

He explained that “One of the airlines, Aero Contractors Ltd., at present has only one serviceable aircraft. “This is in contradiction to the Nigerian Civil Aviation Regulations which stipulates that no airlines operator shall carry out schedule commercial operation with only one aircraft. “The minimum acceptable number is three aircraft”

Capt Muhtar further hinted that “any airlines with one aircraft is in contravention of the
NCAA regulations therefore cannot be adjudged to be capable of providing safe operation.
“The only option available for such airlines is to suspend its operations temporarily while other aircraft arrive in due course,”
With this explanation, only time will tell what becomes of Aero?